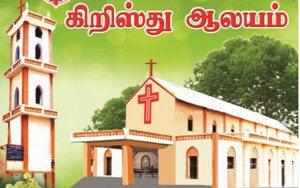 Mr. Thomas Murrey was the first person to inhabit in shanthinagar in the year 1962. He worked as an Accountant and a land broker for Isha Abdul Islam commitee. Then a Retired teacher Mr.J.G. Ponnaiah, Mr.J. Appadurai, Mr.Gunasingh and Mr.Sam.D. Jeyaraj came to live in shanthinagar with their families. Mr.J.G. Ponniah and his wife Mrs. Annamal walked from house to house to meet families and spread the Gospel. There was 11 christian families in the year 1963. A prayer cell was being conducted in a small house.

The interest of the Christian families was to build a church in their place. Mr.Thomas Murrey took efforts to set the land for the church and because of that the Muslim allotted 15 cents land for free of cost. As the 15 cents land would not be enough to build a church, Mr.J.G. Ponnaiah, Mr.J.Appadurai and Mr.Solomon Muthaiah requested the muslim committee to allot some more area. Thus the muslim committee people gave 52 cents of land totally as donation and also bore the registration fee on 24th April in the year 1963. Rev. Thiraviyam Jesudason was the circle chairman at palayamkottai in those days.

In the year 1970, the Christian families at shanthinagar wished to build a church. They decided to build a church of 32 feet long and 18 feet broad. Mr.J.G. Ponnaiah and Mr. Edwin Joel worked hard for that purpose. The palayamkottai Pastorate Treasurer Mr. Edwin also co-operated much and thus a church was built in shanthinagar. Bishop Rt. Rev.Berraroot Thirugorret dedicated the church on 18th December in 1971. Mr.J.G. Ponnaiah served as the first catechist of the church. He was affectionately called “Koil Thaththa” by the people.

Shanthinagar C.S.I. Church was under palayamkottai pastorate in the year 1963. Rev.Thiraviyam Jesudason was pastorate chairman and Rev. R. Joseph was his assistant .

Rev. Simson sigamani became the pastorate chairman on 1.6.1986 . The shanthinagar church grew well. The church space was not sufficient for the people to worship. The thought of building a new church rather than extending the same church came to the mind of the pastorate chairman. A decision was taken to build a new church. Bishop Rt.Rev. Daniel Abraham he laid the foundation for the new church on 19th September in the year 1982. Rev. Simson sigamani raised fund as bees collect honey in the beehive and he worked hard for that  Mr.Thangasamy and Mr.Shanthosaraj were very supportive in the church construction. The church was beautifully built within two years of Rev. Simson sigamani period. The size of the new church was 142 feet long and 44 feet broad. The size of the balcony was 26 feet long and 20 feet broad. The balcony was built inside the church. It was dedicated by Bishop Rt. Rev. Jason S. Dharmaraj in the year 1988. The Silver Jubilee of this church was celebrated grandly on 19.5.2014 during the period of  Rev.A. Samuel, the pastorate chairman shanthinagar. There are 555 Families in the shanthinagar  and 2 small branch churches (Varusapathu and Kirubanagar) The shanthinagar church functions in such a way that it glorifies God’s name. Rev.V. Selvaraj serves as the pastorate Chairman. 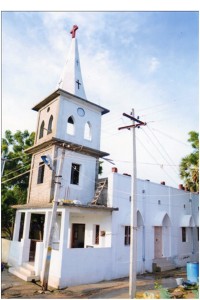 Rev.Dr.G.N. Kanthaiah Started a small prayer cell in a small hut in the varusapathu village in the year 1953 and it has now grown as the Christ Church Varusapathu

A new church was built and was dedicated on 17.12.1983, Saturday at 4.30 pm by Bishop Rt. Rev. Daniel Abraham . It was built with at temporary tiled roof of 25 feet long and 20 feet broad. Mr.Durairaj Thangaiah served as the church catechist 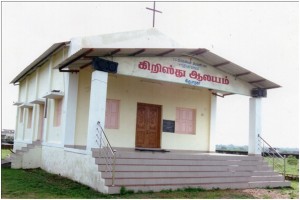 With the great effort of Rev.A. Samuel and the people of shanthinagar Church, 64 cents of land was allotted to Kirubanagar church in the land at panayankulam.