This pastorate was founded by “Nellai Apostle” Rev. Rhenius in 1827. Athi Narayanan who accepted Jesus Christ as his Saviour was baptized. Having no child for many years, he was blessed with five children after baptism and he was named Asirvatham. He built a thatched shed for worship. After Nallur pastorate this pastorate came into existence.  Rev. D. Viswasam Dharmakkan was the first Presbyter who served at Pulavnur, he constructed a tiled church which was dedicated by the Bishop Rt. Rev. Samuel Morley on 26th December 1900 and named it as St. Stephen’s Church, since the Day was the feast of  St. Stephen. At present this pastorate consists of 4 branch congregations and there are three schools in the pastorate. 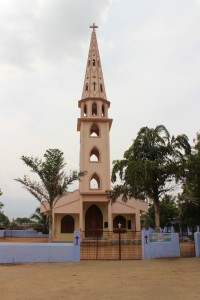 Avudaiyanur: Many Hindu families are living in this village. About 100 years ego a C.M.S. Primary School was started by missionaries. Mr. K.T. Arumainayagam was selected as pastor to serve in this pastorate. His relatives joined the congregation. Mr. J.V. Thangasamy decided to construct a church. Bishop Rt. Rev. Tubbs laid the foundation for the church on 7.8.1926 and dedicated the Holy Immanuel Church on 4.12.1932. The family of Mr. J.V. Thangasamy constructed a pillar for Bell, which was arranged by Mr. Chellapandian. Thanks to his great effect, a mandapam was erected in front of the church.

Agampillaikulam: Subban @ Swamidason from an orthodox Hindu family accepted Christ and his children followed suit. As first the service was conducted in a school. St. Mary’s Church was dedicated by the Bishop on 18.3.1985.

The congregations in this Pastorate are: