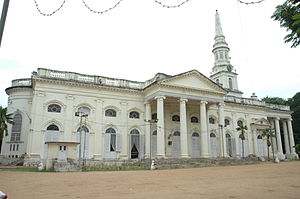 Bishop C.K. Jacob presiding the Church of South India Inaugural Service. The presiding bishop of the inaugural function was the Rt.Revd C. K. Jacob of the Anglican Diocese of Travancore and Cochin. A vast congregation gathered in the cathedral at Madras from all over the world. The following historical declaration was made by Bishop Jacob at the inaugural.

“Dearly beloved brethren, in obedience to the Lord Jesus Christ the head of the church, who on the night of his passion prayed that his disciples might be one, and by authority of the governing bodies of the uniting churches whose resolutions have been read in your hearing and laid in your prayer before Almighty God; I do hereby declare that these three churches, namely – the Madras, Madura, Malabar, Jaffna, Kannada, Telugu, Travancore Church councils of the South India United Church; the Methodist Church of South India, Trichinopoly, Hyderabad and Mysore districts; the Madras, Travancore and Cochin, Tinnevelly and Dornakal dioceses of the Churches of India, Burma and Ceylon; are become one Church of South India, and these bishops, presbyters, deacons and probationers who have assented to the basis of union and accepted the constitution of the Church of South India, whose names are laid upon this holy table, are bishops, presbyters and deacons of this church. In the name of the Father, and the Son, and the Holy Spirit, Amen.” 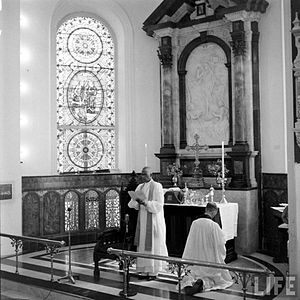 By the independence of India in 1947, the union was achieved and the CSI officially established. Leaders said that the Church of South India was conceived in 1928 at Tharangambadi and born at St. George’s Cathedral, Chennai on 27 September 1947, after twenty-eight years of prayer and discussion.

The inauguration of the Church of South India opened a new chapter in the history of the churches. This was the first time in history such a union was realised between episcopal and non-episcopal churches. By this union four traditions came together, i.e., Anglican (Episcopal), Congregational, Presbyterian and Methodist.

When the Church of South India was inaugurated there were fourteen dioceses. Today the church has twenty-two dioceses and more than five million members. There are eight dioceses in Tamil Nadu, six in Andhra Pradesh, four in Kerala, three in Karnataka, and one in Sri Lanka.

In the 1990s, a small number of Baptist and Pentecostal churches also joined the union. In 2013, the Church of South India appointed the Rev. Eggoni Pushpa Lalitha as the first female bishop in India. She was appointed to the Nandyal Diocese of the Church.