One small agency of the Diocese whose work through the years has exerted a most abiding and far-reaching influence on the life of the Church is the Tinnevely Children’s Mission founded in 1891. 20th June 1891 is a red letter day in the history of Christianity in the Tirunelveli Diocese. It was the day when a few prayer warriors prayed together in Osborne School, Palayamkottai and formed ‘Baliar Sangam’ a separate unit in the Diocese to work among school going children. It is the oldest and the only Sangam in India for such a noble cause. The Tamil word ‘Baliar’ means ‘Kids’ and ‘Sangam’ means a ‘club/organization’. The prayers of Mr. Solomon Gnaniyar and Mr. Samuel Packianatan and their determined work helped to build this Sangam well. The pioneer in this field was Rev. L.I .G. Scott Price. Mr. Archibald , steered the functioning of this Sangam to work with real (???) and courage. From the beginning the Mission has encouraged the habit of Daily Bible Reading among children by its 3 publications-“Baliar Nesan” (a monthly magazine for children in Tamil with daily Bible Reading portions and short notes), Scripture Union Cards and Almanacs. 18500 copies of ‘Baliar Nesan’ and 3000 copies each of the Scripture. 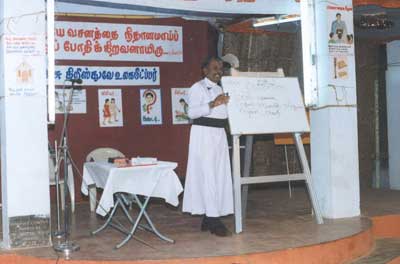 Union Cards and Almanacs find their way into as many Christian homes not only within the Diocese, but even outside as for as Sri Lanka, Malaysia and the Gulf Countries. An English edition of ‘Baliar Nesan’ has been recently published. Scripture examinations for children are conducted every year; and prizes awarded.

The Vacation Bible School (VBS) has valuably supplemented the work among children in this Diocese since 1952. The courses conducted in several centres each year are becoming increasingly popular.

During the Michaelmas vacation every year the Children’s Mission arranges a camp at Courtallam, the famous spa of South India.

Children singing in a Camp

The Diocese is fortunate in possessing at Courtallam an ideally situated bungalow – ‘Rock Hall’. This is being used throughout the year for S.C.M. Camps, Retreats for Clergy and other Diocesan Workers.

The ‘Sangam’ aims at training the children in reading and understanding the Bible and praying to God. It also conducts many

competitions among them to encourage their habit of pondering over and memorizing the verses of The Bible. The winners are given gold coins or medals as prizes.

Every year, on a Sunday, children go singing from door to door and collect offertory to support the missions of this Sangam. And that Sunday called ‘Baliar Gnayiru’ . Every week

Good Shepherd Camps
In all eight councils, camps for the children are conducted. Around 2500 children come and participate in them. Once in a year, camps are also conducted for them in Courtallam, a place surrounded by green hills with girdling waters.

Audio – Tapes Ministry
Every year , one book of the Bible will be selected. Songs based on the teachings from that Book will be composed and released in cassettes.

Communication Center
Two full time workers serve in this center. Bible verse are printed in Calendars, papers and cards and distributed to the children. Greetings for various occasions like Birthday, Wedding are also printed here and sent to the members and supporters of this Sangam.

Baliar Nesan
Every month, Baliar Nesan Magazine is printed and sent to the readers. In Tamil 18600 copies and in English 600 copies are printed. There are 6498 Life members to this magazine. From August 1991 onwards English Magazine has been printed and sent to the readers. The magazine contains articles on various areas. For Tamil and English magazine, Rs 500/- is collected as life – subscription. Under the direct supervision of the Director, Baliar Sangam, 18 full time staff members work among children in different pastorates of the Diocese and five staff members work in the office.

Christian Education Department
This department was started on 21 – 06 – 1987 to strengthen the children in the Bible knowledge. Children in churches and schools are categorized according to their age and encouraged to learn and study the Bible, discern the false teachings, live witnessing living, know the history and the growth of the churches and get strengthened in their faith in the Lord.

Teachers Guide , materials and work book are also published by this Sangam. Students at schools are given learners guide to learn more things from The Bible. In the month of February, a test is conducted for the students and attractive prize are given to the winners.

Training camps for the Sunday school teachers are conducted periodically .

Every year, through this Sangam, around 3,00,000 students are reached at different place in the Diocese, of which most of them are Non – Christian Students.

We have many more other projects to reach, preach and teach Christ, to the children with the help of modern electronic devices like video – projector, puppet shows. ACDs VCDs DVDs etc. We have also planned to produce video films based on the incidents from The Bible.

This Sangam has also determined to conduct camps every month for a few chosen young boys and girls to develop leadership qualities and to do the follow up ministry in their own churches. It has also decided to identify prayer warriors in every church who could spend seek strive and win souls for Christ before He comes.

We plead for your earnest prayers for this Sangam to continue to glorify God’s name.