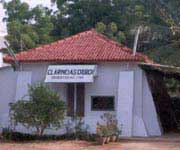 In the very early times of the British in Palayamkottai, their only place of worship was Clarinda’s church which had been dedicated in 1785 by the famous missionary Rev. Schwartz of Tanjore. Being a very small church in course of time it could not accommodate the increased number of English worshippers, Palayamkottai being a military center with one or two regiments whose officers from the ran of sergeant were all British.

The military authorities therefore requested the government to build a new church for them. So was Christ church built and dedicated on 23rd February 1856. The church was under the Ecclesiastical Department of the Government which paid the salaries of the clerk and gardeners and the responsibility of maintaining the church in good condition was entrusted to the Public Works Department in Tirunelveli.

Though there were English Chaplains in charge of the English services to begin with, when the new church was built in response to the request of the government, the C.M.S. Missionaries stationed in Palayamkottai agreed to conduct the services in Christ Church in addition to their Missionary work and this arrangement went on till 1955 when Rev. G.N. Kanthayya became the first Indian presbyter to take charge of the church.

All through its history, there were Indian Christian worshippers too in Christ Church, their number being very small in the early decades. When Palayamkottai closed to be a regimental center, the number of English worshippers dwindled to as low as 20, but proportionately the number of Indian worshippers increased.

Coming to the recent past of our own times, the average attendance at the English services (Evensong) was always below 100. In the centenary history of churches, it is mentioned that only with the starting of a choir by the Palayamkottai Musical Association that the attendance increased significantly.

There had been capable organists, earlier all of them English, the last one being Miss Ardill who had served for more than 20 years. The first Indian organist who took over about the same time as the formation of the choir in 1945 was Mrs. Rachel Devadason who served as organist for 25 years. At the communion service on Sunday mornings Mr. Thompson played the organ for many years. Later he and his son David Thompson rendered very valuable service, playing for evening services too. Since then and upto the present day there have been many men and women who have kept alive the musical traditions of the church by singing at the English service both in the morning and evening.

This history being brief as it is, will not be complete unless we refer in the first place to a succession of English Missionaries who served as chaplains of the church – Bishop Sargent, Rev. T. Kimber, Rev. R. F. Ardill, Rev. G.T. Selwyn, Rev. H.P. Young, Rev. C.W.F. Bennett, Rev. T.S. Garret and several others. Likewise we should mention a succession of Indian Pastors who being in charge of the church took English services too, beginning with Rev. G.N. Kanthayya succeeded by Rev. S.D. Swamidoss, Rev. M.G. Samuel, Rev. D.V.J. Kirubaimani, Rev. V.D. Selvanayagam, Rev. S. Jeyapaul David, Rev. Jasos Selvakumar, Rev. Simson Sigamani, Rev. S. Manickam, Rev. G. Stephen Lionel and now Rev. R. Joseph.
The Good Shepherd Church, High Grounds, Palayamkottai was dedicated on 1.4.1987. The pastorate has 3 congregations: