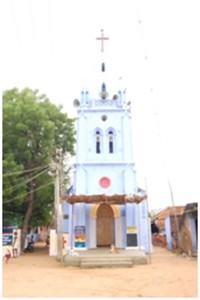 Keerankulam is situated near Munanjipatti, which is in the route of Tirunelveli to Sathankulam. The Rev. CET Rhenius preached the Gospel to

the villagers at Munanjipatti, where they used to buy things at ‘Santhai'(market).The villagers accepted Jesus as their Saviour, when they lived in the village called ‘Vadalivilai’. When they accepted Christ, they shifted to another place and named it as ‘Keerankulam’. Then they built a small church with bricks and dedicated it on 8th September, 1957, named it as St. James Church. Then the Alter was extended and Tower was built.  When Mr. D. Asirvatham Solomon was Catechist, a small house was built for Catechist and now it is used as Parsonage.

From 1/4/2010 Keerankulam became a Pastorate Centre and Rev. TB Swamidoss was the Pastorate Chairman, resided at Kodankulam. The Rev. JKT Barnabas, Rev. CET Sureshkumar, Rev. Jebasingh, Rev. T. Samuel were served as Chairmen.  At Present Rev. DJ Jebaraj is serving. There are nine Branch Churches are there.

In 1939, there were 5 families worshipped in the thatched shed, which was dedicated in 1939 by the Rt.Rev. Bishop Neil. In 1970 they converted the Church into tiled roof in 1970 with the help of Mr. Victor and it was dedicated by Rt.Rev. AG Jebaraj. Due to severe drought many were left the village. In 1987 the church was electrified and got EB connection with the help of Mr. John Abraham.

The foundation stone was laid by Rev. P. Arul Vedanayagam, Council Chairman South West Council in March 2001 for extention and renovation.  The tower also was built and dedicated in August,2001 by Rt.Rev. Jeyapaul David.

The foundation stone was laid by Rev. CET Sureshm kumar for Mission house and in 28.08.2014 it was dedicated by the Rt.Rev. JJ Christdoss.  Mr. T. Samuel raj is serving as a Catechist for the last 15 years and 32 families are there. 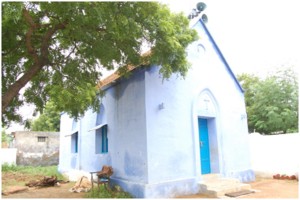 was healed four of their family members Called Kandan, Velliayan, Ramasamy, Chinnamadan were followed Jesus Christ. In 1956 the Land Lord Aalappan gave a piece of land for their worship. So, they built a small thatched shed, but Mr. Vellaiyan, with drunk quarrelled with others and was hindrance to worship.  So, Aandi gave his place for worship, in 1956. Then the Church was built and dedicated by the Rt. Rev. Selwyn. At present 25 families are worshipping. 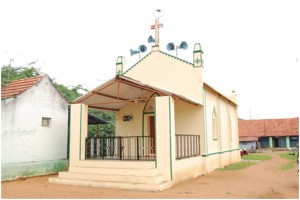 In 1925 there was a small thatched shed church.  Then in 1948 Rev. Selwyn (Later became Bishop) did missionary work. In 1955 a small church was built and dedicated by Bishop AG Jebaraj.

Mr. Arumainayagam, Mr. Muthu, Mr. Joel & Mr. Jebaraj served as a Catechist and now Mr. Pitchumani is serving as a Catechist. There are 17 families are worshipping. 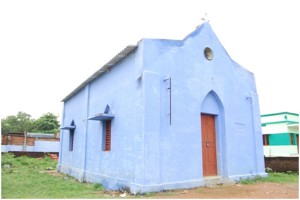 This Church is situated in Kariyandi. It was established in 1922 and dedicated by Rt.Rev. Daniel Abraham. Ten families are worshipping the guidance of Mr. Samuelraj, Tr. 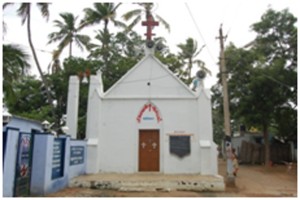 The Church was established in 1949 and they built a small thatched shed church. After two years they demolished the old one and built a new one and it was dedicated on 26.03.1951, (Maundy Thursday) by Bishop Selwyn Durai. Mr. Daniel was catechist during the church construction time and now Mr. Samuel is serving as Catechist. 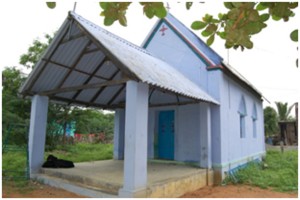 In 1975, ten families came together and prayed in a house. Then the Church was built and dedicated in 25.12.1978 by Rt.Rev. Daniel Abraham and named it as St. Paul’s Church. Rev. Peter Devadoss was presbyter, Mr. Joel was the Catechist. Fifteen families are there worshipping. 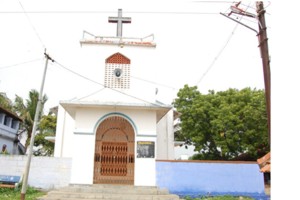 It is world known for Birds Sanctuary. Every year birds come from foreign countries in the season, since there is a big pool for them and enough trees for them to construct nest to lay eggs, multiplying and fly return to their home countries  every year. So, the Tamil Nadu Government made it as Birds Sanctuary and gives necessary protection.

In 1933 Rev. GT Selwyn gave Adult Baptism to 81 persons in a same day and the Church was established.  In 08.07.1998 Rev. TOM Goldwin laid a stone for the present church, and it was dedicated on June, 2001 by Bishop Jeyapaul David, when Rev. Fredrick Ratnaraj was Presbyter. 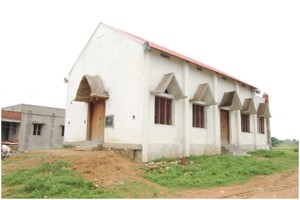 This village  belongs to ‘pillaimar’ community in the early period. But Arumuga Nadar belongs to Aaikulam near Ariyakulam purchased the fertile land for agriculture and settled at Thennavaneri. Since Arumuga Nadar alone cultivated his form, the pillaimar community disliked his growth over there village. Due to this reason, there was a riot between two community and the matter went to District Collected. He  gave a protection to Arumuga Nadar. Later, he became Christian and his family came one by one to Christianity in 1920.   Then they built a church with stones and dedicated in 1972, 15 families worshipped. When the Church grown in to 40 families, they constructed a new church and it was dedicated in 23.05.2012 by Rt.Rev. JJ Christdoss. Now Mr. Dharmakkan is serving as Catechist. 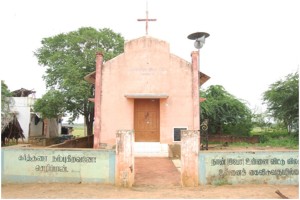 The church was established during the period of Rev. GT Selwyn. The whole village became Christians.  In the later period there was a problem created within the church and they were backsliden except 7 familes.  The Rev. GSA Packianathan laid foundation stone for the present church in 17.04.2004. Then the church was built with the help of Maharaja Nagar Pastorate and dedicated by Bishop Jeyapaul David in 03.08.2005.  Mr. D. Arputham Daniel is serving as Catechist.