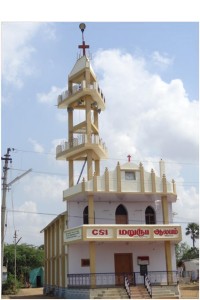 Parappadi village is situated in the Nanguneri – Tisayanvillai road about 11km from Nanguneri. In Parappadi a Government High School is functioning at Annanagar.     People had to attend their worship at Holy Trinity Church, Parappadi. During Rev. SAE Joshua’s period as Pastorate Chairman of Parappadi, fervent prayers and frequent visits of Ms. Kaniammal and Ms. Swarnarathnam brought in a worship center in the house of one Mr. Rasalaiyan.  This continued for one and half years.  On 15th of August 1993 a thatched roof shed of 15’ x 8’ was constructed in the locality and worship service was conducted.  On 31st August 1993 the first Communion Church was conducted by Rev. Jebamoney and the church was named as  Marurooba Alayam.  This continued for next five years with morning and evening services conducted regularly.  13 families took part in the services.

In 1998 September, 22nd during the tenure of Parappadi East Pastorate Chairman Rev. S. V. Appadurai Gnanaraj, the foundation stone was laid by Chairman of South Council of Churches Rev. V. Vedhamuthu Ponraj.   Since the locality of the church was in common market place efforts were taken with the then Collector Mr. Niranjan Madi to get approval for 7.2 cents and permit was obtained for church building.  Following philanthropists contributed for the construction of the church along with members of the church who contributed their mite.

On 29th May, 1999 the church building was completed and it was dedicated by Rt. Rev. Jason Dharmaraj, Bishop in Tirunelveli.  In 2012 under the Bishop Rt.Rev.Dr. JJ. Christudoss the church was declared as Parappadi East (Annanagar) Pastorate as the head quarters of all eight churches in Parappadi East locality with Rev. ARGST Barnabbas as the Presbyter. Those churches are :

In the tenure of Rev. John Samuel foundation stone was laid for a 1140 sq.ft. Parsonage and Mr. M.  Samuelraj and family took charge of constructing it and the work is in progress. 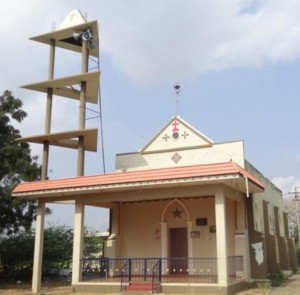 Then a British Missionary encouraged the converts to construct a church there. In 1919 foundation stone was laid but construction was sluggish. This again started by 1929 upto lintel level and stopped for want of funds.  Since five families joined the church worship services were conducted in a school building.  The roof and floor construction was again revived during the period of Rev. M.K. Israel Thanaraj in 1978.   Mr. M. Israel, Catechist and few teachers of the Parappadi School assisted in the construction work.  On 15th April 1979 on the day of Easter the church was dedicated to Resurrected Lord’s Glory by Rt. Rev. Daniel Abraham, Bishop in Tirunelveli and the church was named as Resurrection Church (Uyirthezhuthalin Aalayam). In 2008 the Church front Tower was constructed and dedicated by Rev. Augustin Gnanaraj.

At present there are 25 families members in the church of which 7 families are staying elsewhere for their work. Mr. Mohan Justin is the Catechist at present. The following is the list of Catechists:

Sadayaneri is a primitive village situated six kilometers in the north-east of Parappadi East Church. European Missionaries Rev. C.J. Renius and Rev. Edward Seargent ministered in this village during 1847-49 and 1843-52 respectively.  In July 1849 the church was formed by Rev. D. Yesudasan of Suvisheshapuram church and took over as the fifth Presbyter. The first baptism took place on 10th September, 1856 for three persons and in 1860 for two more persons.  This initiative led to construction of a thatched shed was constructed for worship.   In 1875 a thatched roof church was constructed. In 1880 a missionary home was constructed. By 1990 there were 10 male and 5 female congregates attended the worship.  In 1915 a tile roofed church was constructed in the third step.

During the period of Rev. V. A. David, in 1925 they mobilized allotment of 1 acre and 50 cents of land around the church. During the tenure of Rev. I. J. Iyyadurai, on 3rd July 1929 this church was rededicated by Rt. Rev. Western, Bishop of Tirunelveli Diocese as the fourth church. In 1971 there was migration of many members to other churches. In 2005 under Rev. P.D.Muthuraj the church was further extended and rededicated for the  5th time by Rt. Rev.S Jayapaul David.