The members of East Sivanthipuram effectively performed Evangelical work and Children Ministry among the residents of Kamaraja Nagar which encouraged them to procure 13.5 cents land in the locality.  This land was registered on 15.11.2000 and transferred from Mr. John Ponniah’s possession to the authority of Rev. K. Masilamony on behalf of Tirunelveli Diocese.  Then on the Children Ministry went on unhindered under the involvement of Mr. David Kovilpillai, family of Mr. Dasayyan and many young girls of the church.  In 07-10-2005 permission was sanctioned for construction of a building for Sewing School by the then Panchayat President Mr. A. F. Joseph.  On 22.01.2006 a grand function was organized in the building by Sewing School, Christmas Tree festival of the Church and the Sunday School day.  Rev. DJ. Jebaraj BA BD, was the presbyter and Mr. D.D.Devasirvatham was the Catechist at that time. Mr. D. David Jebaraj and Mr. E. Alex followed subsequently as Catechists.   Though in 2006 some slackness developed in the ministry Mrs. Anbu continued Children Ministry.  In 2009 the ministry again picked momentum as Rev. J. Justin took over as the Presbyter who appointed Mr.V. Anthoniraj as the Catechist.  The ministry in Sewing Center brought two converts Ms. Meena and Ms. Lakshmi.  They joined ministry with the Catechist and in end of 2011 during Calvary Church fasting prayer many children testified their experience of visions and prophesy. In 12.08.2012 youth from East Sivanthipuram church conducted a revival meeting. In the beginning of 2012  the ministry developed some slackness but God raised Mrs. Jeyanthi Jeyakoil and Mrs. J. Grace Helen Ruby who by their Prayer Fellowship brought in many new souls into the church.

In 2014, under the intervention of Rev. K. Arulraj Pichaimuthu and  Rev. J. Selvaraj the Bishop Rt. Rev. J.J. Christudoss  gave church status to the community Hall. Then with involvement of West Sivanthipuram Presbyter Rev. J. Maduram, MA BD 0n 28.10.2014 ten families were added to the church through baptism.  A first Marriage Service was conducted on 13.11.2014.  The evangelical work of the church was assisted by missionaries Mr. J.L.N. Ponniah and Mr. J.Arputharaj.  Now the church is growing with Divine Blessings and earthly Blessings too.

HISTORY OF THE CHURCH

In 2003 a group of members of the Mela Sivanthipuram pastorate, under the leadership of Rev. Masillamani and Catechist Mr. Ibrahim and Mr. Jeyaraj (Kamala Stores) evangelized this area every Sunday evening very sincerely, followed by prayer in the vacant land of Mr. Dasayyan at Ullaasanagar.  The church took roots in a thatched hut of Mr. Arulpandi and Mrs. Chandra Suganantham with just four members.  On 10.02.2004 the Communion Service started by Rev. Samuel Prakash and  Mr. S. Rajith, the Catechist with 10 communicants. Rev. Samuel Prakash continued as the Presbyter till 31.06.2004.   Rev. DJ. Jebaraj followed suite and he showed interest in the ministry at Ullaasnagar.  On 10.10.2005 Rev. Dr. M. Christy Chakravarthi, Presbyter of Perumalpuram Pastorate visited the place with his church members for ministry. They witnessed the church functioning in a thatched hut and the hurdles and abuses they were facing there. The church at Perumalpuram had a standing commitment to construct one church in a year.   The church members were  burdened  to build a church at Ullaasnagar  In 2005 the foundation stone was laid by P Rev. Dr. N.Christy Chakravarthy the Pastorate Chairman of Perumalpuram.  With active involvement of  Rev. DJ. Jebaraj, Pastorate Chairman and Bro. Jeyaraj (Kamala Store) funds were mobilized and the church building was completed.  On 22.04.2007 the church was dedicated by Rt.Rev. Dr. Jeyapaul David, Bishop in Tirunelveli and President of National Council of Churches in India.

Rev. Justin took over as Presbyter from 01.07.2009.  In the eastern side of the Ullaasnagar Church under Sivanthipuram Panchayat there was a heathen temple. During festivals they used to go in procession around our church and dance on the church mandapam. When resisted they insisted to ban loud speakers on church tower.  They were taking steps to acquire vacant land adjacent to church to build a temple.  Rev. Justin stepped up action to mobilize funds to buy the land and register it with the Diocese as per procedure.  A toilet facility, a bore well and Generator were installed with Panjayat permission so that the land is effectively utilized.  No more eruptions took place and the church celebrated all festivities with joy and happiness.  Since 02.06.13 Rev. J. Selvaraj took over as Pastorate Chairman and guided the church in more evangelical work and new souls were added into the church.   Since 04-06-2014 Rev. J. Madhuram took over as Pastorate Chairman.  Mr. S. Ranjith continued as Catechist with enhanced Rs. 1000 salary and he is also the secretary of LCF. Mr. S. Jebaraj is the treasurer. Monthly account statement was read out in the church.  The church which started with 4 families has grown to 50 families in 10 years.

During 1993 the Christians residing at Gopalnagar and Ponnagar areas of Agasthiarpatti had to travel all the way to Mela Sivanthipuram or Vikramasingapuram for worship.  It was very difficult to travel with family for 4 to  5 Kms especially during Festival Seasons. The advent of church formation at Agasthiarpatti emerged as Bro. Selwyn Joel residing there was inspired by God to offer his residence for conducting worship service as a forerunner.   This thought was shared with Bro. Swamidhas and Bro. Rajaiah of Ponnagar village.  This thought was further strengthened with encouragement received from other volunteers Bros. Anthonibabu, Sugumar, Paulraj, S.Kovil and Sellappan who joined the team.  As a Divine blessing Bro. Joshua, owner of Oxford English School, came forward to offer his school premises for worshiping on Sundays.   Few elders approached Rev. ARGST. Barnabbas, Presbyter of V.K Puram Pastorate and got his acceptance to conduct worship service. Mr. T. Christopher Solomon was appointed as the first Catechist.

The inauguration of the church service was led  by Chairman of the West Council Rev. P. Devadasan who delivered the first Sermon of Blessing chosen from Genesis 12 : 22 and prayed.  Due exhortation was given by Pastorate Chairman Rev. A.R. G.S.T. Barnabbas for the physical and financial growth of the church.  The first Local Church Committee was constituted and among them following persons were chosen:

In their first meeting of the LCF on 04.07.1993 held soon after the Sunday Worship it was decided to name the New Church as St. John’s Church.  On 28.11.1993 Mr. R. Joseph was appointed as the part time Sexton.  The Church Committee decided to locate at least 20 cents of land for Church construction.    But God opened the heart of Mr. Thangavasanam who offered to sell 67 cents of his land located in between Agasthiarpatti and Ponnanager.   Later God offered to buy another 20 cents of land annexed to it from a good friend.  The first building for worship was of 30×20 thatched shed with sand flooring. Later it was extended to house 20×40 Asbestos roofing with cemented flooring. At this stage on 20.11.1993 the foundation stone for 80×40 church building was laid by Bishop Rt. Rev. Jason Dharmaraj.  Great encouragement was received from Rev. S. Manikkam,  Pastorate Chairman of V.K.Puram pastorate for construction of this church. All the members of the congregation showered flowers on the land and prayed earnestly for earlier construction of the church building.

Initially there was a delay in getting approval from the District Collector for the church building.  With the intervention of Mr. Charles of Thirukkadamai the approval was sanctioned. The preliminary church was constructed by collecting Sand and bricks transported by a lorry freely serviced by Mr. S. M. Paulraj, son of Mr. Thangadurai and many church members volunteered to physically involve in the construction, which was a memorable sight to watch.  It reminded us of the work executed by the remnant in Israel who constructed the walls of the Lord’s temple under the leadership of Nehemiah.  In the same way the zeal shown by the church members along with their family while construction of the final church tower, by toiling day and night despite heavy rains also is worthy to be recorded here.

Following avenues were trod by the church committee for mobilizing funds for the church building :

The new church building was completed and was dedicated for God’s Glory by Bishop Rt. Rev. Jayapaul David on 27th March 2003.

Since the inception of the church till 1991 M/s Christopher Solomon Vedhamani, Samuel, Gandhi, D. David were subsequently took the responsibility as Catechists. Our Lord who respects the small beginning of the church with nine members has grown into a church with 105 families as communicants.  Let us praise God for such countless blessings.

Arumagampatti village is situated in the Sivanthipuram Panjayath under the Ambasamuthram Thaluk.   30 Christian families were residing in this area 65 years ago.  These people had to travel 2 and-a-half km to attend church worship at Holy Calvary church in Melasivanthipuram Pasorate.   In those days, since villages were not electrified, they had travel under the guidance of Hurricane Lamps during night hours for festival worship.   Few elders in this village, referred mainly, M/s R.S. Yesuvadian, R.S. Abraham, Seenivasagam and Duraipandi were burdened to pray earnestly desired for construction of a church here.   At this juncture the sons of Late Mr. Swamidhas were inspired to contribute eight cents of land for this purpose.  Then the locality was christened as Swaminthasapuram and Holy Abisheganathar church started growing there with initial contribution of Rs.65 per family of those 30 members.   With further contributions the walls were erected with calcium stones  and the roof was constructed with tiles on Palmarah timbers, which was contributed by Mr. Seenivasagam.

While the church was under construction a small shed with Plamarah leaves was constructed and was dedicated as ‘Swamidasapuram Holy Abishegarathar Church’ by Bishop Stephen Neil in the year 1949.  From that day worship started in this shed with just a plate bell to chime the service time.  In 1956, Mr. Chellasamy Writer took steps to get electrical connection for the church.   He got the entire related charges for electrification from Mr. Mahadevan Iyer of Ambasamuthram.  From 1956 the worship was carried out under electoral power.  In 1973 the congregation members contributed brass vessels which was the source metal for the making of the church Brass Bell.  A tower was built with Teak wood and since then the bell started chiming for the call to worship.

The main church construction started with foundation stone being laid on 29.05.1987 and started progressing under the leadership of M/s R. Anthony, S. Jebamani, Yesuvadian and Abraham and the rest of the congregation.  The construction was supported by contribution of Rs.1000 each of the members employed in M/s Harvey Mills and the rest as per their capability.   One lady donor contributed the charges for constructing the entire RC roofing.   The  50 x 20 church completed its construction by 27.04.2988. In the same year the church was dedicated by Bishop Rt. Rev. S. Jason Dharmaraj, M.A.,B.D.,DD.  That year the worship was conducted by presbyter Rev. G. Vedanayagam, M.A.,B.D., and the Catechist Mr. S. John Samuel. At present the church is having a membership of 300 families and Rev. J. Madhuram holds the responsibility as the presbyter and A. Samuel is the Catechist. 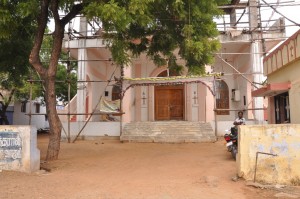 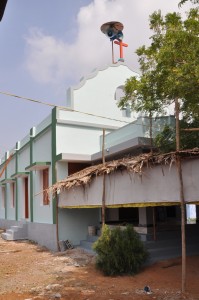 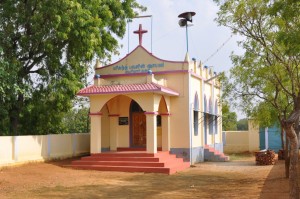 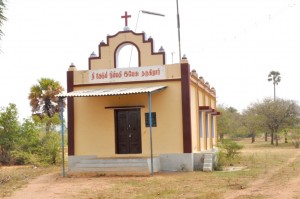 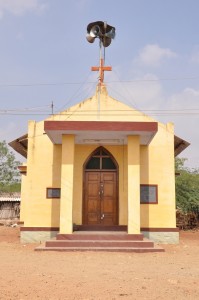 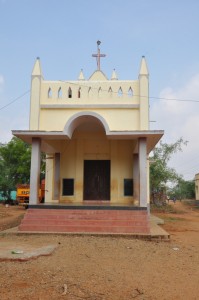