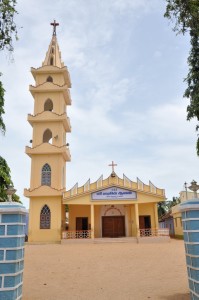 At present Rev DJ Jebaraj is serving as Pastorate Chairman. 7806921842

There are 4  Branch Churches in this Pastorate :

The first Church was built at Vedamputhur and a congregation of 5 member,  Yesudian,  Asirvatham, yoseph,      Packianathan &  Samuel were worshipping in a Palmnthatched shed.  In 1922, when Rev. YD Devadason working as a Presbyter the congregation planned to build a church at Adaikalapattanam and colleced bricks, sand and stones.  But in 1925 when Mr. Asirvatham took charge as Catechist he initiated the work with the help of Mr. V. Samuel, Mr. Asirvatham Chelliah, Mr. V. Daniel, Mr. N. Samuel, Mr. S. David, Mr. S. Jesudian Thangiah.  On  17th September, 1925 the church was dedicated by the Rev. John Samuel, Circle Chairman of Nallur in the presence of Rev. Robert Peter, Pulavanoor.The size of the Church was 28 x 17.5 sq feet.  The front portico was 10 X 17.5sq ft. The  foundation was laid with stone and  limestone. The  walls were brick and  limestone plastered with  limestone and sand. The roof was tiled with surratti. The Church was later extended and dedicated on 17th September, 1932  by the Rt.Rev. Fredrick James Western and named St. Paul’s Church. The congregation from Suviseshapuram Asirvathapuram & Vedamputhur worshipped at Adaikalapattanam St. Paul’s Church.

When the roof concrete was spread, the whole concrete stuff crumbled and fell on the floor. By the grace of God all the workmen on the spot were safe.  Those who opposed the work to jubilant and exchanged sweet among them. But in  the midst of such difficulty the Servants of the Lord and the congregation continued to work with faith and prayer and the work was completed,  the size of the Alter – 17 x 13 sq. feet, and the front Portico 20 x 37.   On 15.01.2001 the  Rt. Rev. Dr. S. Jeyapaul David  dedicated the church.

Then the beautiful tower was constructed when Rev. CET Sureshkumar served as Pastorate Chairman and Mr. S. Jesudason was Catechist.  The tower was dedicated on 27.12.2004 by the President of NCCI and  Bishop in Tirunelveli, the  Rt.Rev. Dr. S. Jeyapaul David.

With the serious effort of Rev. AB John Kennedy the Parsonage was reconstructed and refurbished with the help of  donors from of Melapattamudaiyarpuram congregation and congregation in Koviloothu Pastorate. In 09.02.2013 the Parsonage was  dedicated by the Rt. Rev. Dr. JJ Christdoss MA BD MTh DD. The  Rev. AB Kennedy served as Pastorate chairman, Mr. D. Samuel Raj , Secretary, Mr. D. Jesuvadian Jeyaraj, Treasurer.

At present the Rev. DJ Jebaraj is serving as Pastorate Chairman. revdjjebaraj@gmail.com