Women’s Fellowship
A Humble Beginning
The present Women’s Fellowship of the Diocese of Tirunelveli had a humble beginning. The tiny seed sown in the remote village called Kadatchapuram on the New Year Day of 1848 has now grown into a giant banyan tree. We praise the Lord for this phenomenal growth and giant strides. One of the most renowned priests of the early Tirunelveli Church – the first South Indian to be ordained according to the Anglican order – Rev. John Devasahayam, was then ministering in this village and exhorting men and women to very high standards of Christian living.
They Asked For It
His saintly wife, Muthammal Devasahayam was a silent force among the women of the parish. On the New Year’s Day 1848 after listening to the sermon in which the congregation was exhorted to make some New Year Resolution, the mothers went to the Parsonage and said that their New Year Resolution was to form a fellowship for prayer and instruction and desired that their Pastor’s wife should lead them in such a fellowship. That was the origin of the Mother’s Union in Tirunelveli. When Rev. John Devasahayam reported its formation through the C.M.S. Intelligencer, the idea commended itself to many, and before long Mothers’ Unions were formed in C.M.S. fields all over the world.
A Child Much Older Than Its Mother
So, when the Mothers’ Union of Tirunelveli Diocese joined the mainstream of the Women’s Fellowship of the Church of South India in September 1961, it had already completed one century and more of sustained service. It had then a strong force of 20,000 members in its 750 branches, well established in every parish in the Diocese and engaged in several activities not altogether new. However, the new links forged with similar women’s groups in other Dioceses with different milieu and modes of service have been of immense value to us. Having fused the old and the new, we have been engaging ourselves in several areas of service and just a few highlights are mentioned in this brochure.
Women Workers’ Training Centre
It was opened on 5th January 1960 by Bishop Trapp. Located at Nagalapuram, it is the hub of several projects aimed at, the liberation and empowerment of the Dalit women. The centre conducts short training courses and long training courses right through the year. Through Bible Studies and Vocational Training, the trainees are well equipped for ministry among women in the villages.
T.D.T.A. Packiam Ammal Kallur Children’s Home
This is the outcome of the single handed labours of a devoted old mother – Packiam Ammal who had a vision to care for the orphan and semi-orphan children, providing them shelter, education and Christian nurture. The 62-strong Children’s Home has been run by the Women’s Fellowship after the demise of Packiam Ammal.
Kirubai Illam 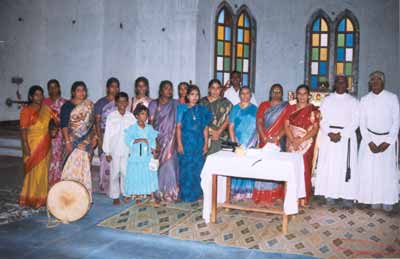 (Grace Lodge) is a unique service centre founded in 1970 by late Mrs. Dharmaraj to provide shelter to the fallen,the deserted and the socially discarded women.Several young women were helped to return from darkness unto light and rehabilitated in happy homes.

The home is now run by the Women’s Fellowship, of the Diocese. 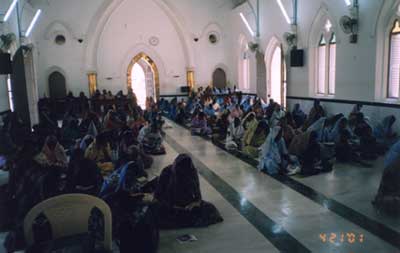 Women’s Welfare Centre at Kulavanigarpuram was opened in 1988 to train young girls in useful vocations like typewriting and sewing. It is found increasingly useful and there is good scope for more activities to be undertaken.

Pre-Schools
Pre-Schools have been established in 19 centres for the neglected village children who are taught Bible Stories, Verses and Songs. Many a child is saved from child labour.
Adult Education Centres

Committed to the eradication of illiteracy among the adults, the Women’s Fellowship established Night Schools in 14 villages of 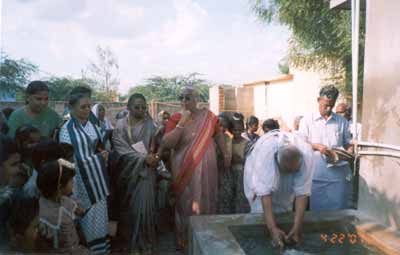 the Diocese long before others dreamt of the literacy drive.

Sewing Schools functioning at 5 centres were pioneered by a former Secretary of the Women’s Fellowship, late Mrs. Leela Gnanaraj. She saw them as useful means of providing livelihood for poor Hindu women, besides bringing them to a knowledge of the love of Christ.

Charity For The Downtrodden
With a concern for the poor and the destitute, the old and the disabled, our members regularly visit some of their homes to cheer them, and on special occasions offer them some useful gifts. 100 poor widows are helped with a monthly pension of Rs.150/- each. The Fellowship distributes the Bible to the non-Christian students time and again.

Cow and Calf gifted to a widow

Women’s Sunday
Women’s Sunday is observed by all branches on the first Sunday in the month of February every year. Appropriate prayers are said and special messages delivered.
World Day Of Prayer
World Day Of Prayer is celebrated on the first Friday in March. A particular country is specially remembered on that day. Prayers are offered for the needs of that country. The day serves to remind all our branches that they belong to a world-wide family.
Annual Retreat For Pastors’ Wives
The Women’s Fellowship has the responsibility for conducting this Annual Retreat for Pastor’s Wives. They are the Presidents of the Women’s Fellowship Branches in their respective Pastorates. So, the spiritual enrichment they receive in these Retreats benefits them and enables them to cater to the needs of the members of their branches.
Annual Conference
The Women’s Fellowship conducts a conference every year at the Diocesan level. More than one thousand women from various parts of the Diocese take part in the conference. A new theme is chosen for the conference every year. New songs and special messages based on that theme are sung and delivered on that occasion with a view to create an awareness.
Fasting And Thanksgiving Meeting
A Fasting and Thanksgiving meeting is held every year at the Diocesan level. during the first week of December .to praise the Master and express our sincere gratitude to Him for guiding us through thick and thin and sustaining the Ministry throughout that year. More than 800 women attend that meeting.
Leadership Training Camps
Our office cum Training Centre is used extensively for periodic Retreats. Its main use is for Leadership Training Camps held in January and June every year when the trainees receive orientation in spiritual ministries and service to the community.
Self Employment Scheme
The women who are below the poverty line are provided with grinders, sewing machines and goatlings, which the Women’s Fellowship believes, will go a long way not only in ameliorating their existing conditions but in helping them stand on their own legs for eking out their livelihood.
Future Plans

Falling in line with the national awakening to the betterment of the womenfolk, we trust in God to be a means of their uplift and their discovery of the love and concern of Jesus Christ. We seek your prayers for God’s guidance in all that we do in His name and for His glory.
If you would like to know more about the activities of our Women’s Fellowship, please read our quarterly ‘Mathar Mahizhchi’.