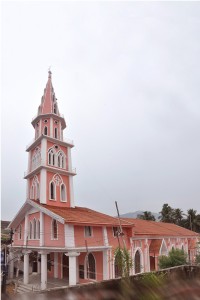 Mela Sivanthipuram village is situated in the valley of Podigai Hills on the banks of Thamiraparani River, surrounded by canals and green fields.   The earlier settler was one Mr. Pechimuthu Nadar, a farmer, who migrated to this place from Pulavan Kudiyiruppu, a village adjacent to Cheranmagadevi and popular for folk songs, since it was affected by sever famine.  He named this village as Pulavanpatti.  Originally the village Sivanthipuram was named after one Sivanthiappa Naiakkar, a Commander in the army of King Thirumalai Naiakkar of Madurai, who donated the lands to this village.  Since the Pulavanpatti village is situated west of Sivanthipuram in later dates it was renamed as Mela Sivanthipuram.

Long  time back the family of one Mr. Abraham was the lone Christian family in Mela Sivanthipatti village. The first Church was planted in 1857 by Mr. Gnanamuthu in a thatched shed.   In 1860 few people who were against Christianity joining hands with Aatheenam and set fire to the thatched roof.  Yet the Christian families confidently stood by to construct another church in the same location.  Agriculture and Climbing Palmarah tree was their main vocation.  As days passed by the Christian population started growing.  In 1880 the East India Company established a Spinning Mill in the foothills of Papanasam Hills.   This brought in many outsiders to migrate and settle in Pulavanpatti village.  Many of them also converted themselves to Christianity.   With the involvement of the villagers Mr. Arulanandam was able to mobilize funds to construct a big Church there and it was dedicated in March, 1910 by Bishop Arthur A Williams.    In 1933 the church was further extended with a portico and Tower and was rededicated by Bishop T. Westrer.    During that time a Hindu brother with chronic sickness came to the church from George Town of Vickramasinghapuram and he was miraculously healed  when prayed over.  He with gratitude donated the Church Bell which is still chiming.  As the church started growing some more extension was carried out on the frontage of the church and it was dedicated by Bishop Stephen Neil on 7th January 1940.   On further growth of membership with slight additions and modifications costing Rs. 31,000 the  Big Church was dedicated on 4th November 1972 by  Bishop Thomas Carrot.

By now the church was overflowing and to accommodate more crowd the Elders and the Church Committee in consultation and guidance of Pastorate Chairman Rev. D. J. Jebaraj it was decided on 28.01.2006 that the existing church to be demolished and a new spacious church be constructed.  Church Construction Committee was formed with Mr. P. Joseph Balachandran as the Treasurer,  a team committee members comprising of M/s D. Thanaraj, D. Abraham Joseph, A. Asir Samuelraj, N. Sundararajan Muthiah, A. Yobudas, J. Stanley Sundararaj, I. Scott Lenin.

On 01.06.2009 the work was initiated with prayers by Rev. J. Justin and under his leadership half of the main alter was demolished and extended to 15’ on the backside and the revised alter of 55’x41’ was constructed and work progressed within an expenditure of Rs.30,00,000. The work was completed in a year’s time and on 01.05.2010  it was dedicated by Bishop J.J. Christdoss.

After one year of the extension of the hinder part of the church, the front part extension to 61’x41’  was planned on 30.01.2011 under the leadership of Rev. Justin costing estimated to Rs. 70,00,000.   On 01.05.2011 the foundation stone for the extension was laid by Rev. J.P.M. Vasanthakumar, Clergical Secretary.   Under the leadership of Rev. Justin and Mrs. Sobana Justin  the church members demolished the frontage of the  church.  All church members irrespective of their professional associations came forward voluntarily to assist in the construction work.  The work was completed and it was dedicated by Bishop J.J. Christdoss on 01.05.2013.    After this work under the leadership of Rev. Selvaraj it was decided to construct the pinnacle  and within seven months a 125’ tall pinnacle was constructed.   By God’s great Grace of this 125’ tall church was re-dedicated by Rt. Rev. J.J. Christdoss on 01.0.2014.  Funds for this new church was not mobilized from any institutions but was entirely by the members of the congregation and their friends and relatives.

At present 417 families sojourn in the congregation.  The members evangelized and planted churches in nearby villages.   In Ullasnagar the evangelical work started by conducting Sunday School to local children and now Ullasnagar St. Thomas Church is established here.  The church sent its first missionary Mr. Rajendran to work with FMPB.  21 others from the church followed in mission work as family whose names are listed below: 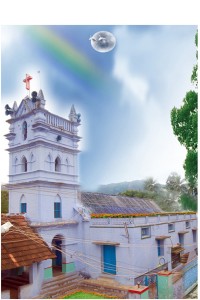